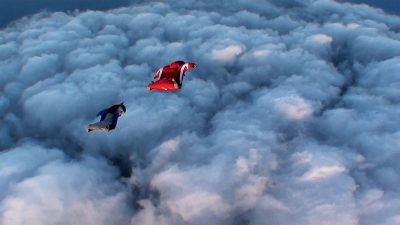 Wingsuits have been for the past few years. The ability to fly and maneuver at high speeds through the air has developed some of the most high-profile base jumpers in the world. For some reason, mankind has had a fascination with flying (or falling depending on how you look at it). As innovation continues to move humanity closer towards personal flight, let’s look back at all the trials (and errors) from our past.

Franz Reichelt was a French tailor in the early 20th century. His goal was to create a safety mechanism that would help people land safely from a high distance. Early tests of his proved to be successful, but as time went on, he failed to recreate his early achievements. Reichelt is the first person to develop what we now know as a parachute. Unfortunately, his first (and last) test involved him jumping from the Eiffel Tower with his makeshift harness. His chute failed to deploy and he plummeted 187 feet to his death.

By the time the first World War was over, airplanes were in the skies. The development of the parachute was in full swing and proved to be successful in saving the lives of pilots. After the war, it became evident that the parachute would indeed be useful for other opportunities. Thus, the airborne infantry came to be.

When World War 2 broke out, the Allied Powers had to come up with a way to get troops on the ground- and fast. During the invasion of Normandy, many allied forces stormed a frontal assault on the beach. The second tier of the plan was to drop thousands of infantry behind enemy lines and cut off supply routes. This would be detrimental to the first tier of the invasion. How did the US get their men behind enemy lines? Paratroopers. By using parachutes, the allied armies were able to drop men in enemy territories at night.

By 1952, the heat of free-falling and the development of aircraft that could send people to the outer reaches of our atmosphere had been developed. This meant that (for fun) people could jump out of an aircraft from thousands of feet up and land safely. Adrenaline junkies hopped on that in a heartbeat. By this time, skydiving had become an international sport.

In 1960, Joseph Kittinger set the record for jumping from the highest altitude. The process was developed by NASA and included a helium balloon that Kittinger would ride to the very edge of our atmosphere. Kittinger jumped from 74,700 feet. His record was only broken recently, By Felix Baumgartner in 2012.

In 1999, the first real development of the wingsuit had been developed. Wingsuits allow the wearer to maneuver obstacles while in free fall. Jeb Corliss has set many records with wingsuits including flying through China’s Tianmen Cave.

Freight Industry Expected to Grow in Next Ten Years