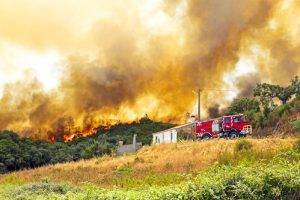 The Wildomar Fire grew from 350 acres Thursday to 700 acres Friday morning. The Cleveland National Forest service released this information in a tweet just after 8 a.m.

According to the tweet, the fire continued 15 percent contained and has prompted the evacuation of about 200 homes. While fire workers are working very hard to try and contain the blaze, there’s still a lot of work left.

An earlier tweet stated that mandatory evacuations are being forced for many inhabitants. All of those who live west of Grand Avenue, north of Avenida La Cresta and south of Calle De Lobo in the La Cresta community must evacuate. Anyone else in the area can stay in their homes, though they should prepare for a potential evacuation.

The Fire Is Serious, But Not Yet Deadly

On Friday a spokeswoman for CalFire told KTLA that no structures have been damaged yet. However, it’s a clear risk with a blaze that’s this large and uncontained.

The Los Angeles Times reported the fire started about 12:30 p.m. Thursday in the Wildomar Off-Highway Vehicle area in the Cleveland National Forest when a man crashed his motorcycle into a tree.

The 18-year-old rider tried ineffectively to extinguish the blaze before running about two miles to his truck. He then called the authorities, who arrived to a rapidly expanding and spreading fire.

Locals should call the Cleveland National Forest’s Trabuco Ranger District at (951) 736-1811 for information on the fire.