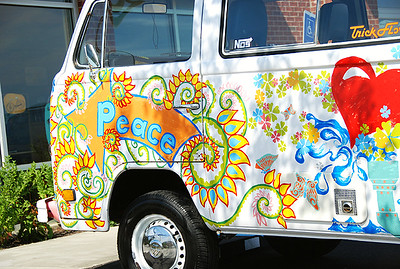 The VW Bus has been an iconic figurehead in the automotive world since its inception in the early ’60s. Since then it has spawned a few variations as well as encapsulated the American traveler with a way to get around. With a new variation of the classic bus in development, let’s take a look back at what made this such an awesome ride.

The van has its start in the mid-’40s. While Bernardus Marinus “Ben” Pon was visiting German from the Netherlands, he planned on purchasing a few loader vehicles for his company. While he was there, he saw a flatbed carrier. The flatbed was on the front while the driver was seated behind it. From there “Ben” Pon noted the potential of the cart. He quickly designed a small sketch of a van, placing the driver at the very front. The idea was to design a transporter vehicle with a towing capacity of 1,200 pounds.

After the initial designs were implemented, they found that the towing capacity didn’t quite have enough “oomph” to take on the necessary tasks. This delayed production, but shortly after this conclusion they decided to drop a 25 horsepower engine. Upon further research of the prototype, they found that it did not meet the aerodynamic efficiencies that other cars (such as their VW Bug) had achieved. Simple changed were made using a wind tunnel at the University of Braunschweig. These changes included splitting the roofline and the windows into a “vee” shape. By November 12th of 1949, the first release of Type 2 rolled off the assembly line. In all, 9,541 Type 2’s were released and sold to the public in its first year. This style (with some minor improvements) was kept until the end of 1967.

By the time the second generation had been developed, Americans were already infatuated with the VW Bus. Quickly and assertively the ’60s counter-culture of the hippie movement saw these buses used heavily for transporting groups of friends around the country. While the typical way to travel across the country with a family or friends utilized the station wagon, the VW Bus provided a significantly larger frame and more open space. The brightly colored design and ergonomic shape were a stand-out amongst American cars of the time. Bands like The Grateful Dead developed a following where hippies would jump in their VW Type 2 and drive around the country following them. This led to many conversions and inspired today’s current off-grid living van lifestyle.

Minor alterations were made to this van for these years. These included a square front guard and a larger engine. As with the older version, many younger generations decided to move in this direction. Incorporating a diesel engine meant better gas mileage. US Oil embargos of the time had been killing the larger and more powerful engines (think muscle cars). This issue also led to the inclinations of alternative fuels. A main staple in the VW Bus design was the incorporation of the “Bio-Diesel” engines. A regular diesel engine could quickly (and relatively cheaply) be converted over to accept fryer oil and vegetable oil. This would incorporate increased fuel efficiency cost, better environmental impact and less strain on the engine itself. This unknowingly became a staple of the Bus itself as many who had already owned one during their hippie days could convert them over into bio-diesel.

Another big feature of the biodiesel conversion was the implication of California emissions standards. By the ’70s, the green movement was in full swing. The state of California started to pursue stricter regulations on the carbon footprint of automobiles. Big vehicles took a larger hit within the industry and automotive manufacturers began to design smaller, more fuel-efficient cars.

The third generation was developed to alter the persona of the original T2 design. While larger and heavier, many of the key features remained the same. Unfortunately, so did the engine. With a vehicle now larger and more spacious, the weight ended up being a real drag on the gas mileage. Other than that, the VW still maintained its reputation as the ultimate camper van.

One of the major updates was the inclusion of the Westfalia series. This added a pop-up camper option to the van. Many current versions of the Westfalia have had engine swaps. This is typically due to the higher output for similar-sized engines. One of the major engine swaps consists of Subaru engines. These provide significantly better weight distribution and more power to each of the axles. Typically, if you go to a van meet in 2020, you are going to see a plethora of these.

After the initial inception and a few alterations through the Bus’s life, the folks over at VW decided to castrate it. Changing it from the be-all-end-all camper to a converted mom-wagon. We would go into details about the engine specs, and as much as we would like to keep you on this page for Google Analytics, we don’t even want to bore you with it. Its better left forgetting this ever happened.

During the early 2000s, VW decided to possibly remake the van. Although only a few were designed, this acted as a testing point to see if the market was still viable for the iconic redesigned VW Bus. As much as this was to run alongside the VW “Classics” redesign (such as the VW Beetle), the industry wasn’t ready for a new, and savvy van. Especially when SUV’s were dominating the market. The concept failed to receive the initial interest from many investors and the project was shelved.

Recently, VW decided to re-introduce the Bus. Aptly named the “ID Buzz”, the van is a complete redesign from its classic progenitors. The designers put their interest in bringing back the classic design and similar shape to the original Type 2 bus. Along with that, an all-new electric engine that can boost up to 369 impressive horses, the camper is back. The design team wanted to bring back the Bus for all the right reasons. Environmentally efficient, powerful and enduring, the Bus has maintained every reason why people fell in love with it in the first place.