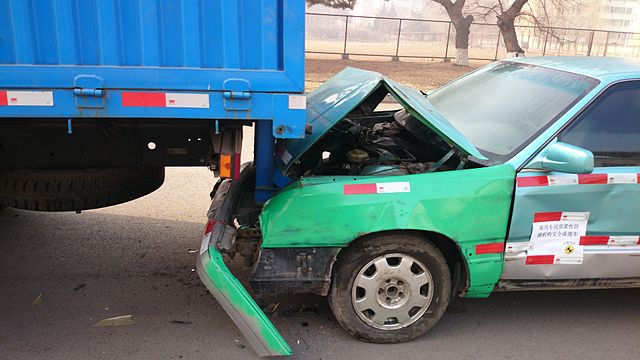 The side underride helps to stop cars from moving under a semi-trailer. We have all seen it in the movies. An epic police chase where the hero escapes on a motorcycle only to be blocked by large semi-truck. There is nowhere left to turn, the cops are right on his tail, but he still has one option. That’s right. He slides right under the moving semi, mere inches from the deadly wheels.

Unfortunately, that amazing shot maybe even further removed from reality. After a recent $42 million verdict, a tragic car crash has brought massive attention to the important question regarding the necessity of underride guards on semis.

A 16-year-old driver, Riley Hein was killed on the interstate in New Mexico when he was involved in an underride crash. The car was wedged underneath the trailer of the semi and dragged for half a mile before catching fire and bursting into flames. All of this, unbeknownst to the driver.

HDT and the truck driver were found negligent to Riley Hein’s death and the company later emphasized their commitment to having all their trailers equipped with safety guards below.

And, even though the company was found guilty of negligence, the jury ultimately “determined that Utility’s trailers were not ‘defective’ and found that they did not present an unreasonable risk of injury.” An interesting take following the death of a young driver.

Side Under-rides presented by the Media

This case has led to a variety of coverage from local and national media regarding the importance of underride guards. Many of these reports have over-sensationalized the problem but, to that end, have also brought out some truth.

Looking at some statistics, most trailer trucks spend 90% of their time on the interstate, so a T-bone by a car is not highly likely. However, that did not stop WUSA9, a Washington D.C TV, channel from reporting on the defiance from truck industry leaders on the pressure for new features. Albeit, these features would improve safety and create less of a driving hazard on the road.

Reports concluded that “internal documents revealed that the industry has been fighting the use of side guards for years.”

A viewing of a 2006 letter from the Truck Trailer Manufacturers Association to the National Highway Traffic Safety Administration appears to comment on the proposed rulemaking of underride guards.

The main reason? “NHTSA reports that a combination of truck underride countermeasures has been determined not to be cost-effective.” Instead of being concerned about safety, the heads of companies are more concerned about the linings of their pockets.

“The report addressed the costs and benefits of theoretical side impact guards based on the assumption that an equivalent of the current rear impact guards….along the sides of truck trailers …. The technological feasibility of such hypothetical guards was express. The modifications to trailer frames, floors, and sidewall structures needed to provide sufficiently mounting locations for such side guards, as well as the added weight and cost of those modifications, were also not addressed.”

The utility made this issue know during the Hein suit, noting that the “federal government has determined that side-impact guards have not been shown to be technologically or economically feasible.”

Testing an Aftermarket Trailer Side Underride

After some research, there were virtually no viable trailer underride products on the market, let alone in the country. But after long hours of testing, one company says they have it.

In 2017, the IIHS or Insurance Institute for Highway Safety tested a product titled the Angel Wing. The company, Airflow Deflector, says it makes a full line of varying underride protection devices fit for all types of semis and trailers.

They have run many tests covering a wide range of variables. The wing side-guard can withstand a 40-mph hour crash. However, most of the products add up to 450 to even 800 pounds to the trailer, depending on the configuration. On their website, they are selling a 53-foot Angel Wing semi-trailer kit for $2,897, with free shipping.

Additionally, the high cost of these tests is a problem. Great in theory, not very practical in the real world. The truck would also likely be moving, which complicates safety tremendously with dynamic modes– so what you see here might not end as well in the real world. Everything is under protection, but engineers must draw the line somewhere between feasibility and how often these modes occur.

“the weight concerns I can understand,” he said. “My first job out of college was for a small trailer manufacturer and we would do weight audits. Even though we only produced 24 trailers a year, we would look at every single component. This allows us to look at the trailer to see what we could shave off to save weight.”

In other words, companies will do anything to save money on their deliveries.

Few people would argue that side underride guards could save lives. And tragic stories such as that of Riley Hein cannot help but make an appealing case for them. But at what cost?

It may seem morbid and cold to put a dollar amount on human life. Unfortunately, the government needs to evaluate the benefits of future regulations, human life becomes merely another statistic. The government must use a tool called the value of a statistical life, as Marketplace exploited this year.

The fact of the matter is, there are millions of trailers out there, vastly outnumbering the trucks.  Larger companies can absorb the cost, but it will hurt small companies and independent drivers. You can already see something similar with California requiring trailer skirts.

Then there is the weight. We already have a weight limit of 80,000 for the truck, trailer, and cargo. The easiest way to get around that would be a weight exemption. The means the FMCSA has already done for APU (auxiliary power units. These are little generators to run the HVAC and electrical systems of a truck to reduce idling).

Side Underride Helps Prevent Cars From Going Underneath

TTMA also points out a significant increase in the likelihood of high centering of the side guard. This happens on steep changes in highway and street levels. These are railroad crossings, which can result in tractor-trailers becoming stranded on railroad tracks.

Overall, the necessity for side underride guards seems to be a larger issue than one might think. Should the government regulate companies in this way and force trucking tycoons to install underride guards? Given the availability and cost, some may say no. It would be like putting the cart before the horse. What is important to most is what is in the cart instead of the impact of the cart itself. Should the fleets have to pony up the money and install products such as Angel Wing, we will all see a drastic change in the trucking business itself. Advocates for the carriages are still in support and believe that deaths can be avoided if the cost-benefit equation is pushed in favor of side guards. As the industry continues to grow, the necessity for guards may change.

Transport Add-Ons That Work for Your Needs