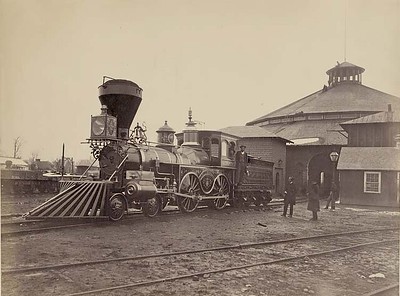 The American railway is the first method of large-scale transportation for steam-powered engines. Developed shortly before the Civil War, the post-war conditions left America with a need to develop faster methods to rebuild towns and cities devastated by the war. Thus, the transcontinental railway was developed. The goal was to bring both the Eastern and the Western United States together.

One of the biggest benefits of shipping via railways is the higher safety rate. Shipping via train (more importantly shipping flammable liquid) via trains keeps the road a safer place. The damage that a flaming oil tanker can do to the surrounding area is immeasurable. If a fire were to happen (or an accident involving a spill) the road would be shut down until the mess is cleaned or the surrounding area is safe. This affects more than just the tanker and driver but surrounding drivers as well. Shipping flammable liquids and gas on trains can cause less severe damages to the surrounding areas. Another large factor is that there are much fewer bystanders around. Not everyone is hanging outside a train (especially when it’s moving) so if an issue were to arise there will be much fewer variables for someone to get hurt.

One of the biggest reasons why so many decide to ship via truck over railways is that trucks are simply faster. With commercial rail shipping, the process can take much longer. Railways have to make stops along the way to deliver and pick up products. With a truck, the driver has the sole job of getting your shipment from wherever it is to where it needs to go. If you are shipping a tanker, then the focus is all on you. At the same time, trucks can go much faster (not that they should) than trains. They have fewer stops to make and if an emergency happens, you will be able to find a replacement truck so you are not waiting extra days for just one truck to be fixed. Now, if something were to happen to the train, then you have to either wait till the train is fixed or wait until another train has the towing capacity to take the job.

Many Are Switching to Railways

With the trucking crisis going strong into 2020, many small businesses have now gone under and do not exist. This leaves a massive hole in shipping providers. Thus, many have gone back to shipping via rail.