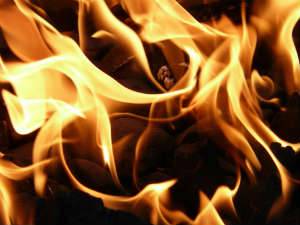 CLEVELAND, OH – A dangerous fire tore through a Cleveland home this morning, in the Old Brooklyn neighborhood. And, fire investigators believe that a child was the cause of the Cleveland fire. A child was playing with a lighter, which ignited a fire and caused the house to go up in flames.

The fire started around 9:30 in the morning, when four people were in the home. According to the fire investigators, this occurred on Hood Avenue near Broadview Road. The home was a duplex with a bottom and upper unit. Luckily, a man escaped from the upper unit, and a family consisting of a woman, her fiancé, and her four-year-old son escaped from the bottom unit. Fire investigators believe that the four-year-old boy playing with a lighter started the accidental fire.

Neighbors of the family hurried to the scene when they saw flames from their residence. However, the residents inside escaped only moments later. Emergency medical personnel evaluated those who were in the building. It is unclear if anyone suffered any major injuries.

Unfortunately, the home endured a lot of damage due to the fire. As a result, emergency crews called the American Red Cross to the scene. They are going to provide assistance to the residents of the home.

Residents are encouraged to remember fire safety tips, especially when it comes to children. In fact, the Ohio government provides helpful information regarding children and fire safety, as well as life-saving tips. Luckily, everyone escaped from the burning home after this accidental fire. It is important to prevent similar situations from happening to other families.