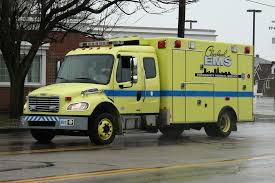 After retrieving a gunshot victim, an ambulance crashed as a result of being struck by another motorist. Following the ambulance crash, hospital staff pronounced the victim dead, reports Cleveland 19 News.

The ordeal began Friday evening when a call summoned law enforcement. Gunshots rang out in a parking lot. One man, seated in his car, was fired upon by another man in a separate car. Neither the shooter nor their car have yet been identified.

Police officers arrived at 15200 block of Lakeshore Blvd at about 11:54 pm where they discovered a victim with multiple gunshot wounds. They applied first aid while emergency medical service providers made their way to the scene.

Officer Sgt. Jennifer Ciaccia of the Cleveland Division of Police Public Information explained the severity of the victim’s condition warranted additional attention. A firefighter drove the ambulance while a second firefighter and two medics tended to the victim in the rear of the vehicle.

The ambulance took off towards the hospital, sirens whirring and lights flashing, traveling southbound on E. 152nd St just before the collision.

The ambulance proceeded through the intersection of E. 152nd St and Woodworth Ave when another vehicle struck it.

A 2016 Kia Sorento traveling westbound on Woodworth Ave collided with the ambulance, crashing into its rear axle.

The strike put the ambulance off balance. It slid left, nearly tipping onto its side. Instead, it traversed into the opposing lane. Then, it struck the left side of a 2011 Honda CR-V stopped at the intersection. Finally, the ambulance proceeded off the left side of the street and crashed into a wooden utility pole.

A second ambulance arrived to transfer the victim and finish transporting them to the hospital. However, either en route or shortly after arrival, the 29-year-old victim perished.

Police have not reported on the drivers for the Honda CR-V or the Kia Sorento. The personnel within the ambulance received treatment for minor injuries.