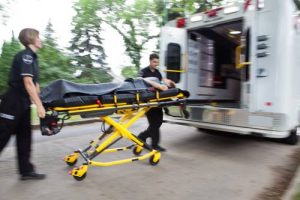 CLEVELAND, Ohio – Cleveland police now say 7 people were hit by gunfire in a shooting outside an east side bar early Thursday morning.

The shooting took place at around 1:30 a.m. Thursday in the parking lot of the DPG Dogpound Lounge on St. Clair Ave. near E. 186th St., according to the police.

Multiple women got into a fight in the parking lot outside the DPG Lounge when a man was hit with something, a witness said. That’s when several people pulled out guns and began shooting, according to the witness

Cleveland police said 7 people were hit by gunfire. Three of them were in critical condition.

A large presence of officers and detectives remained at the scene several hours until the scene was cleared by 6 a.m.

Police told the local news that hundreds of people had gathered for an after-party following a music video shoot earlier in the evening at a nearby park. The video shooting was taking place in the parking lot as well. Police said nearly a thousand people were at the music video shoo.

Cleveland rapper Q Money posted on his Instagram page urging fans to gather at Mandalay Park at 5 p.m. Wednesday. The park is just a few minutes from the bar.

Q Money posted clips from the video shoot on his Instagram story.

A witness told that Q Money was at the bar when the shooting happened. The witness also said the bar got very crowded following the Beyonce and Jay Z concert at FirstEnergy Stadium Wednesday night.

There is no immediate information about the shooter/shooters.